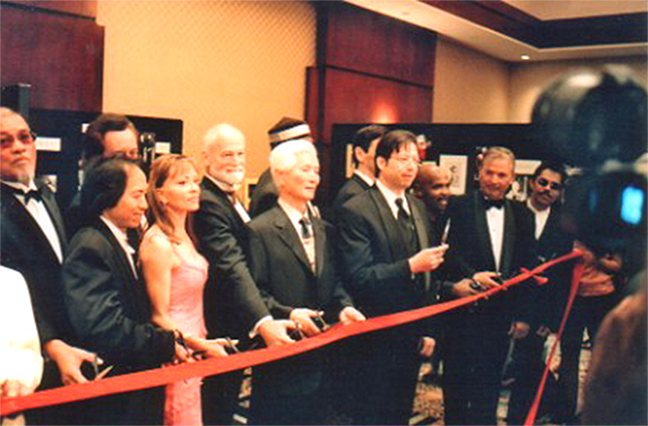 The Martial Arts History Museum officially began as a registered museum on Sept. 15, 1999. It was founded by former magazine publisher, martial arts historian and martial arts veteran Michael Matsuda. The concept of the museum actually began in 1987 but didn’t officially begin until 1999.

After a number of dinner ceremonies and special events, the Martial Arts History Museum gathered the biggest martial arts icons in the world to cut the ribbon in launching the first of many traveling exhibits. For the next four years, the museum was on the road going all across the country. From libraries to conventions to expos to the Queen Mary, the museum was housed in a 1,000 square foot exhibit with wonderful reviews the museum exhibit was in high demand.

After numerous meetings with the L.A. City Council, Mayor Villariagosa’s staff, the California Senate, the San Fernando City Council, and more, it was through the urging of Congressman Howard McKeon and the Mayor of Santa Clarita, that the Martial Arts History Museum open their doors in a brick and mortar facility in the city of Santa Clarita. The museum opened in 2006 in an 8,000 square foot facility which featured a wide range of displays as well as a 200-plus seat theater. The city of Santa Clarita had provided us with future plans to construct are area for three museums, which would include the Martial Arts History. Unfortunately, a year later, a new leadership was in control and their future plans for a museum center were canceled.

In 2010, the museum decided to relocate to a city that would be more open to art and culture; which was the city of Burbank, CA. Burbank is a very populated area surrounded by Hollywood’s biggest productions studios. In 2011, the museum re-opened to the public holding a significant number of events every month. Being located in Burbank, many of the local schools were now able to visit the facility. From Unified School Districts from Burbank, Los Angeles, Glendale and Pasadena, thousands of young people enjoy the museum tours.

Expansion
In 2017, the museum has just launched its newest campaign, “Impact Our Future” with their goal of acquiring donations, grants and funding for a 8,000 to 14,000 square foot facility in order to meet the demands of schools tour requests. In addition, the museum plans to install a 200-seat theater, seminar and workshop area, resource library and a rotating exhibit area for special events.